Holocaust Remembrance Project: How European Countries Treat Their Wartime Past

This first-ever report rating individual European Union countries on how they face up their Holocaust pasts was published on January 25, 2019 to coincide with UN Holocaust Remembrance Day. Researchers from Yale and Grinnell Colleges travelled throughout Europe to conduct the research. Representatives from the European Union of Progressive Judaism (EUPJ) have endorsed their work.

●Many European Union governments are rehabilitating World War II collaborators and war criminals while minimising their own guilt in the attempted extermination of Jews.
●Revisionism is worst in new Central European members - Poland, Hungary, Croatia and Lithuania.
●But not all Central Europeans are moving in the wrong direction: two exemplary countries living up to their tragic histories are the Czech Republic and Romania. The Romanian model of appointing an independent commission to study the Holocaust should be duplicated.
●West European countries are not free from infection - Italy, in particular, needs to improve.
●In the west, Austria has made a remarkable turn-around while France stands out for its progress in accepting responsibility for the Vichy collaborationist government.
●Instead of protesting revisionist excesses, Israel supports many of the nationalist and revisionist governments.

Download can be found on page, Holocaust Remembrance Project: How European Countries Treat Their Wartime Past 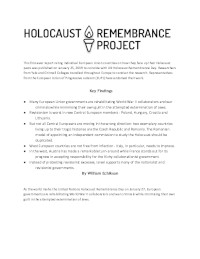