Jewish and Non-Jewish Spaces in the Urban Context

The unifying thread of the interdisciplinary volume Jewish and Non-Jewish Spaces in the Urban Context is the fact that Jewish spaces are almost always generated in relation to non-Jewish spaces; they determine and influence each other.
This general phenomenon will be scrutinized and put to the test again and again in a varied collection of articles by international experienced researchers as well as junior scholars using various urban contexts and discourses as data. From the viewpoints of different temporal and regional research traditions and disciplines the contribu­tors deal with the question of how Jewish and non-Jewish spaces are imagined, constructed, negotiated and intertwined. All examples and case studies together create a mosaic of possibilities for the construction of Jewish and non-Jewish spaces in different settings.
The list of examined topics ranges from synagogues to ghettos, from urban neighborhoods to cafés and festivals, from art to literature. This diversity makes the volume a challenging effort of giving an overview of the current academic discussion in Europe and beyond. Although the majority of the contributions are focused on Central and Eastern Europe, a more general tendency becomes apparent in all articles: the negotiation of urban spaces seems to be a complex and ambivalent process in which a large number of participants are involved. In this regard, the volume would also like to contribute to trans-disciplinary urban studies and critical research on spatial relations.

In the Cellars and Attics of Memory. Mapping Jewish and Non-Jewish Spaces in Contemporary Poland (Part of same volume) 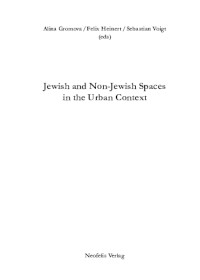