Board of Deputies of British Jews
Women's Review Task Force

From the Introduction by Rosalind Peston (Chair of the Task Force): Since the publication of Women in the Jewish Community in 1994
I have been asked on numerous occasions, ‘What happened to your
report and its many recommendations?’.
In 2008 I approached the Board of Deputies of British Jews with a
view to re-visiting the work we had carried out a decade and a half
earlier. It soon became apparent that we had to broaden the scope
of our original project, reaching out not just to those women who
contributed to the ideas in our 1994 report and whose lives had
now moved on, but to a whole new generation of younger Jews.
The intervening fifteen years had seen many changes in family
structure and attitudes to personal relationships, in the economic
climate and above all in the ways in which we communicate through
new technologies. How had these changes impacted on women’s
lives, on their approaches to their Judaism and on their sense of
Jewish heritage? How had they influenced women’s perception
of community?
One of the most exciting elements of the 2009 Review was our
on-line survey facilitated by SurveyMonkey. Through this survey
along with our focus and discussion groups, Facebook site,
questionnaires and face to face meetings we elicited the views
and opinions of almost a thousand Jewish women.
We decided to let the women speak for themselves and this report
Connection, Continuity and Community: British Jewish Women
Speak Out is the result. We believe it represents the authentic
voice of female Jewry in Britain today. Women are very articulate
about their desire for a cohesive, dynamic, inclusive community.
We sincerely hope they will be listened to and that the leadership
of the community, across the religious spectrum, will heed their
concerns and their hopes. 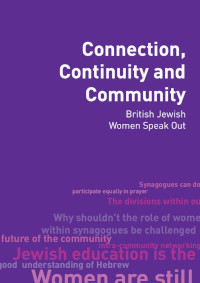