Commission on Women in Jewish Leadership

It seems clear that the UK Jewish community makes it hard for the kind of high achieving and well educated women who thrive in secular life to take on leadership responsibilities within it. In contrast to the wider ‘third sector’, Jewish charitable organisations have very few women in leadership roles despite exceptionally high levels of achievement and education. Four-fifths of a large sample of both men and women in the British Jewish community surveyed in February and March 2012 demanded change in the gender balance of our organisations, statistically signifying clear support for a pro-active and long-lasting agenda for change now proposed in this report by the Commission on Women in Jewish Leadership (CWJL). Evidently this state of affairs resonates strongly with our community. The Commission takes this and other research data from both organisations and individuals as a broad mandate of support from across the community, and it now looks to leaders and to our organisations for implementation. The CWJL was set up by the JLC in early 2011 to recommend ways of advancing more women to senior paid and voluntary roles in the community. It now calls on the community publicly to acknowledge that the current state of affairs is unsustainable, to pledge to make changes that will create equal opportunities for women and men and to act to promote more women to leadership positions. The CWJL accepts the reality that our community, being relatively conservative, prefers evolution to revolution, and that it would prefer to move slowly. The recommendations seek to work within this reality, while noting that the gender imbalances in our leadership are a pressing matter of equality and social justice. There is also a compelling need to address the issues raised by this inquiry before another generation, particularly of young women, becomes alienated, and their talents are lost to the community. The Commission limited the scope of its attention to voluntary (‘lay’) and professional leadership roles in Jewish communal organisations. The terms of reference were tightly defined in order to be realistic about opportunities for change. Some other, related issues which were relevant only to certain sections of the community were frequently raised by members of the public and acknowledged in the Commission’s deliberations (such as helping women back into work, men and leadership, women and reading from the Torah) but have purposely not been followed through with specific recommendations in this report as they fall outside the remit of the CWJL. The issues of women leading synagogue boards and educating children about gender equality form a recommendation for future work as they are key to meeting our remit long term but are beyond our specific brief or expertise. Other areas of diversity and equality, such as age or disability, were not part of our remit. The CWJL’s recommendations cover Governance, Personal Development, Networking, Communications and Other (comprising ideas which do not fall into any of the other four categories). At the heart of the recommendations is a recognition that change needs to come from women themselves, both individually and collectively; from the Jewish community’s organisations and institutions and also, from schools and youth organisations. Before change can take place in organisations, they need to recognise where and when there is indeed a problem.To drive the specific recommendations under the five headings introduced above, the Commission recommends the establishment of a group of lay leaders, to be known as the Equality Support Group (ESG), housed in an
existing organisation, which will monitor progress and ensure that we move forward on this vital issue. The focus is
on ‘tachlis’ (action/substance) not talk. 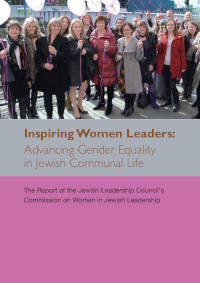