The apartheid contention and calls for a boycott: Examining hostility towards Israel in Great Britain

In late 2017, JPR published a major study of attitudes towards Jews and Israel among the population of Great Britain, a project supported by the Community Security Trust and the Department for Communities and Local Government. We regard it as a groundbreaking piece of work - the first study conducted anywhere that empirically demonstrates a clear connection between extreme hostility towards Israel and more traditional forms of antipathy towards Jews.

This report explores this connection yet further, focusing specifically on two particularly prevalent ideas that are often experienced by Jews as antisemitic: the contention that Israel is 'an apartheid state' and that it should be subjected to a boycott.

In the first instance, the study finds that large proportions of people actually have no view at all on these ideas, either because they do not know anything about the issues, or because they are simply unsure of where they stand on them. This is particularly the case for young people and women - knowledge levels improve and opinions sharpen the older people are, and, as has been found in numerous other studies, women tend to be less opinionated than men on these types of political issues.

Disagreement with the boycott idea is higher in older age bands than in younger ones, increasingly so among those aged 40-plus, a phenomenon that is not found in relation to the apartheid contention. But the ideas are not particularly sensitive to educational level - both agreement and disagreement with both contentions increase the higher the educational qualification achieved.

However, clear distinctions can be found when looking at the data through the lens of religion, with Muslims much more likely than other groups to support both contentions.

The report goes on to explore the correlations between these views and more traditional anti-Jewish ones, and finds clear links between the two, although this is more the case with the boycott idea than the apartheid one. However, it also notes that the correlation is stronger with other anti-Israel beliefs, particularly those arguing that Israel exploits the Holocaust for its own purposes, and those claiming that Israel is excessively powerful or the primary cause of troubles in the Middle East.

Antisemitism in Contemporary Great Britain: A Study of Attitudes Towards Jews and Israel (Series)

Download, The apartheid contention and calls for a boycott: Examining hostility towards Israel in Great Britain 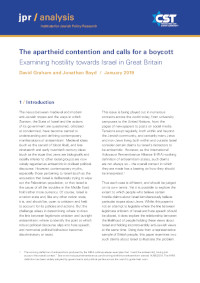