Response to the Commission on Integration and Cohesion Consultation

General:
• Faith communities tend to be heterogeneous rather than homogenous and the diversity of all faith communities must be recognised.
• Public policymakers need to be aware of cultural sensitivities in devel-oping policies that promote cohesion and integration. This can only be achieved through promoting shared values whilst acknowledging the positive contribution that the diverse minority make to Britain.
• Government must be sensitive, astute and acknowledge that integra-tion takes time. The Home Office has acknowledged in the past, one size does not fit all and a tailor-made approach to cohesion is needed. Inequality and poverty need to be tackled to achieve social cohesion.
• The Government has provided welcomed support for voluntary sector initiatives and worked in partnership with them in building cohesion through a variety of programmes. However, the public sector needs to encourage the sustainability of these projects and good practice by fo-cussing on both a long term strategic framework and longer term fund-ing cycles for these projects.
• There is a need to understand the complexity of religious belief and faith communities and their different needs. In addition, there needs to be an acknowledgement by policymakers that communities have a wide range of views on many issues.
• There are many instances where ethnic and faith minority communi-ties work together on issues where we are all affected. However, while sometimes communities and individuals within them agree on issues, sometimes they disagree. The essential thing is to build a framework for open and respectful dialogue where good relationships are main-tained through better communication.
• It is evident that British citizens increasingly have multi-dimensional identities. In particular more work needs to be done to explore the rela-tionship between faith and ethnicity.

Specific:
• The Jewish community is diverse.
• The Jewish community sees itself as simultaneously a people, faith and ethnic group. It is not useful to compartmentalise these identities.
• British Jewry has developed over several centuries a notion of ‘inte-gration without assimilation’.
• Jewish experience of immigration shows that integration can happen but takes time, in particular in terms of institutional development.
• The Jewish community promotes inter and intra communal initiatives on a number of levels in the areas of social cohesion, education, community development, interfaith relations, social action and welfare. Strategic national, regional and grassroots projects exist that are sup-ported by the public, private and voluntary sectors
• Rising numbers of antisemitic attacks is a concern that needs to be tackled.
• The Jewish community is keen to promote good community relations.
• Jewish schools can be agents of social cohesion and promoters of ac-tive citizenship. 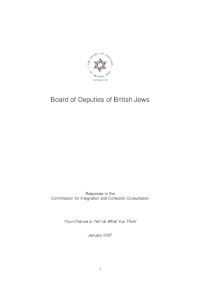