Discrimination and hate crime against Jews in EU Member States: experiences and perceptions of antisemitism

In 2012, JPR conducted a major study of Jewish perceptions and experiences of antisemitism in Europe, after winning a competitive tender from the European Union. The survey, run in partnership with research agency Ipsos MORI and involving several members of JPR’s international team of Associate Fellows, took place in nine EU Member States: Belgium, France, Germany, Hungary, Italy, Latvia, Romania, Sweden and the UK.

Conducted in eleven languages, it investigated Jewish populations’ experience of harassment, discrimination, vandalism and violence; whether or not they report these incidents to the police or another authority; how safe and secure they feel; and how aware they are of their rights under the law. In addition, the survey gathered a considerable amount about Jewish identity, communal affiliation, engagement and participation, and Jewish practice.

The findings demonstrate that three-quarters of respondents believe that antisemitism has become worse over the past five years in all countries investigated. Antisemitic verbal threats and harassment are remarkably common – close to a quarter of all respondents said they had personally experienced an incident of this type in the previous twelve months, rising to close to one-third in Hungary and Belgium. Approximately one in fifteen of all respondents said they had experienced at least one antisemitic physical attack – in the form of being hit, pushed or threatened – within the past five years, most commonly in Belgium, France, Germany and Hungary. As is the case with many criminal incidents, respondents recorded widespread under-reporting of these types of incidents to the police or other appropriate organisations. Close to half of all respondents are worried about becoming a victim of a verbal attack or harassment, and approximately a third is worried about becoming a victim of a physical attack.

Significant geographical variations can be discerned, rendering any singular or uniform description of the Jewish population in Europe, or antisemitism in Europe, imprecise at least. Most notably, there are significant distinctions to be drawn between the character of Jewish populations who experienced life under communism, and those who did not. Furthermore, antisemitism manifests itself rather differently: in Eastern Europe it tends to be associated with right-wing ultra-nationalist forces; in Western Europe it is more commonly linked to leftist politics and Islamic extremism.

On the other hand, it is critical to put these findings into context. The vast majority of Jews in the sample feel a strong sense of belonging to the country in which they reside, and are highly integrated into mainstream society. And, when asked to locate the problem of antisemitism in the larger perspective of other problems in society – unemployment, crime, the economy, etc. – it rarely features at the top of the list. Only in Germany does it hold this position; in Latvia and Italy it comes seventh out of nine issues, and in the UK, eighth.

Jewish life in Europe: Impending catastrophe or imminent renaissance? (Response)
The Exceptional Case? Perceptions and experiences of antisemitism among Jews in the United Kingdom (Other)
Technical Report: Discrimination and hate crime against Jews in EU Member States: experiences and perceptions of antisemitism (Other)
Can Convenience Samples be Trusted? Lessons From the Survey of Jews in Europe, 2012 (Response) 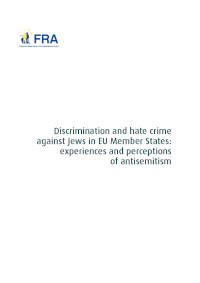