The Exceptional Case? Perceptions and experiences of antisemitism among Jews in the United Kingdom

Based on data commissioned by the European Union Agency for Fundamental Rights (FRA) and gathered and analysed by JPR's academic team, this is the first in a series of reports looking at the perceptions and experiences of antisemitism among Jews in different EU Member States.

This report, focusing on Jews in the UK, demonstrates that Jews feel more secure in the UK than elsewhere, but that Orthodox Jews are measurably more anxious about, and susceptible to antisemitic incidents, than non-Orthodox Jews.

It shows that over half of all Orthodox Jews in Britain are worried about becoming a victim of an antisemitic act, and that they are more than twice as likely as non-Orthodox Jews to have experienced antisemitic harassment or discrimination.

Close to two-thirds of Orthodox Jews believe antisemitism to be a problem in the UK, compared with under half of non-Orthodox Jews, and four in ten of the Orthodox avoid certain places out of fear for their safety as Jews, compared to a quarter of the non-Orthodox.

However, in general, the report shows that levels of antisemitism in the UK are significantly lower than in other Western European countries, and that Jews in Britain feel noticeably less anxious about it than elsewhere on the continent.

Further issues explored in the report include data on how Jews define antisemitism, levels of reporting of different types of antisemitic incidents, and attitudes towards legislation on brit milah (circumcision) and shechita (the methods used under Jewish law to kill animals to produce kosher meat).

Boyd, Jonathan, Staetsky, Daniel L. The Exceptional Case? Perceptions and experiences of antisemitism among Jews in the United Kingdom. July 2014:  https://archive.jpr.org.uk/object-uk164
Result from 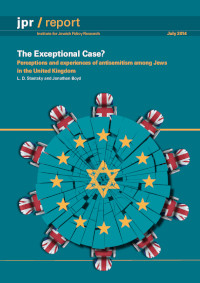