There are three major hypotheses about the future of Jewish life in Europe. The first argues that rising levels of antisemitism, increased criticism of Israel and changing demographics all point in the same direction: that Europe is rapidly becoming an unsafe place for Jews. The second argues that greater levels of diversity and heterogeneity in European societies are creating a more open environment for Jewish life to thrive, and the result can be seen in innovative and creative Jewish initiatives taking off all over the continent. The third argues that the demography of Jews in Europe, with higher death rates than birth rates the norm, points to a slow but inevitable decline of Jewish life.

Which one of these hypotheses is right? This paper examines each of them in turn, but ultimately concludes that there is insufficient evidence to make a fully accurate assessment. All have an evidence base to support them, but none is robust enough to completely outweigh the others.

In particular, it focuses on the new data gathered by JPR for the European Union Agency for Fundamental Rights (FRA), which sheds fresh light on the question of the future of Jewish life in Europe, and provides researchers with what is probably the largest dataset on European Jews ever to be produced.

Discrimination and hate crime against Jews in EU Member States: experiences and perceptions of antisemitism (Response) 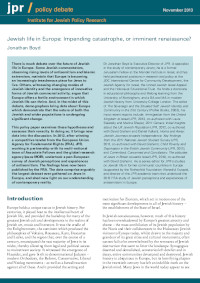