This survey of over 2,000 people (carried out by Opinion Matters and weighted to be a representative sample of UK adults) was commissioned by the Holocaust Memorial Day Trust - the charity set up by Government to mark Holocaust Memorial Day. It shows that 64% of people polled either do not know how many Jews were murdered or grossly underestimate the number: 45% of those polled said they did not know how many people were killed, while one in five (19%) believe fewer than two million Jews were murdered.

Despite the figures, the vast majority (83%) of respondents say it’s important to know about the Holocaust and that we can all learn lessons for today from the past (84%), while over three quarters (76%) believe more needs to be done to educate people about what happened.

Download can be found on page, Holocaust Memorial Day 2019 research 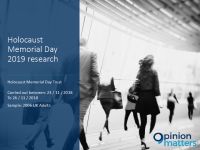