Academic achievement and engagement in Jewish life: First signs of a brain drain?

JPR has been conducting research on Jews in Britain for many years, allowing us to explore trends in Jewish life over time. This study takes four major datasets, spanning close to quarter of a century, to investigate an important and challenging question: is there a negative correlation between high academic achievement and Jewish community engagement? Or, more simply, are the most academically qualified Jews turning away from Jewish communal life?

The answer appears to be yes. It demonstrates that:

• Jews with postgraduate qualifications are, on average, the least engaged members of the Jewish community;
• The gap in levels of Jewish communal engagement between postgraduates and others is particularly substantial in areas such as synagogue membership, outmarriage, charitable priorities and support for Israeli government policy
• Highly educated Jews are about half as likely as non-graduates to see their fellow Jews as a source of natural support, or to express concern about Jewish continuity.

However, high academic achievers are more likely than others to cite positive traits and values (such as fairness, respect, dislike of prejudice, love of learning) as examples of how they feel their Jewishness has affected them.

The report author, Professor Stephen H. Miller OBE, one of the leading experts in the social scientific study of British Jews and senior adviser to JPR’s research team, also notes that the drop in Jewish engagement seen in highly educated Jews can be largely attributed to their more critical evaluation of the Jewish community, rather than any weakness in their personal identity as Jews.

So, in short, the fundamental message of this study is a challenging one for Jews of all types. It indicates that the most academically qualified Jews are turning away from organised Jewish life in unusually high numbers, because the types of Jewishness they find there fail to resonate with the ways in which they understand their own Jewish identities.

It leaves us with at least two critical questions: (i) is academia a detrimental environment for Jews, teaching them to think in ways that implicitly undermine their links with Jewish life (or, viewed from an alternative perspective, is academia a positive environment for Jews, helping to free them from the limitations imposed by Judaism and to think more openly?); and (ii) is Jewish communal life insufficiently rigorous in its thinking to attract the most thoughtful and qualified (or, again, viewed differently, an intellectually rich environment that rightly differs from the academy and challenges its modes of thinking by offering an alternative model)? 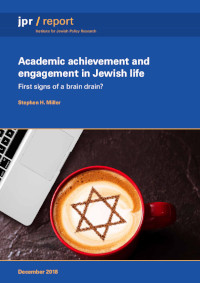