The Revival of British Jewry

It is unusual to find the words “revival” and “British Jewry” in the same sentence. Several decades ago, the title of this paper would have come as a surprise to the many critics of British Jewry. For example, in 1989, Professor Daniel Elazar observed that “the powers that be in British Jewry are content with the status quo and do not seek change.” Author Steven Brook (1990) scathingly remarked that the leadership of British Jewry “revels in its mediocrity, shallowness and philistinism.” And, in 1996, in the conclusion of his study, entitled Vanishing Diaspora: The Jews of Europe Since 1945, Professor Bernard Wasserstein stated that the Jews of Britain are “slowly but surely … fading away. Soon nothing will be left but a disembodied memory.”

The current claim that a revival of British Jewry has taken place is supported mainly by the excellent work of the Institute for Jewish Policy Research (JPR) in London. The JPR has carried out an important analysis of the UK national census data of 2011 and supplemented it with its own more recent community studies, in particular, its 2013 National Jewish Community Survey (NJCS) and its 2016 Jewish Schools report. To be sure, as with all sociological studies, particularly concerning Jews, there are less encouraging data that emphasize the challenges, failures and threats that confront the British Jewish community.

This essay, however, argues that the vibrancy of a community should not be judged by the threats that it faces. While threats and danger form an existential part of Jewish life, they do not necessarily determine the strength or weakness of a particular community. It is important that a community understands the nature of such threats and can organize to overcome them successfully. In doing so, the Jewish community in the U.K. provides evidence that it is vibrant and undergoing a revival. This study focuses on four aspects that show the revival of British Jewish life: demography; religious identity; educational and cultural activity; and confronting antisemitism.

Link to article, The Revival of British Jewry 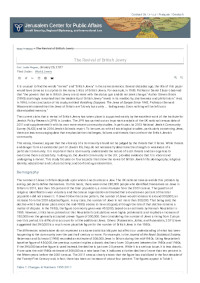