Jewish familes and Jewish households: Census insights about how we live

An innovative study looking at UK census data through the lens of the household – or Jewish family – shows that only a quarter of all Jewish homes are comprised of the stereotypical married couple with children, and two out of three Jewish households in Britain have no children living in them at all. It further demonstrates that an estimated 17,600 Jews aged 65 or above live alone, the majority of whom are women.

The report, entitled Jewish families and Jewish households: Census insights into how we live, is the latest in a series of reports published by JPR that draw on data from the 2011 Census to understand key aspects of contemporary Jewish life in Britain. It is the most comprehensive report on these data published so far, and reveals a number of important insights, hitherto unknown.

The report also investigates differences in household make-up between Jews and other religious and ethnic minorities, and demonstrates that Jews are far less likely than average to cohabit or to live in single parent families – a finding which indicates that the traditional Jewish family is holding up relatively well in the face of general changes in family formation habits in Britain. On the other hand, a higher proportion of Jewish households have people aged 65 or over living alone in them than British households in general, or for that matter, the households of almost every other minority group in the UK.

In addition, household data from the census provide valuable insights into the lives of students and young adults, revealing that there are more Jewish students based in Gateshead than any other city in the UK. Nottingham and Birmingham follow quite closely behind, and both Oxford and Cambridge feature among the top seven locations for Jewish students. One in five young adults aged 25-29 still live with their parents, and the proportion in that age group living alone declined by about a third between 2001 and 2011, probably due to issues around affordability.

Jewish familes and Jewish households: Census insights about how we live 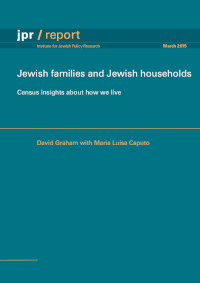