The fourth report in our series on the 2011 UK Census, and the first to incorporate data from the censuses in Scotland and Northern Ireland into the analysis. It explores geographical change in the UK Jewish community, and demonstrates how the UK Jewish population is becoming increasingly concentrated in a small number of core geographical areas.

Our first report, published in December 2012, looked at the UK Jewish population at Local Authority (LA) level, and noted that whilst the size of the Jewish population of England and Wales has remained largely static since 2001, there are significant changes taking place at the local level. Our second report, published in February 2013, also focused on geography, and examined the changes that have taken place at the neighbourhood level. Our third report, published in July 2013, utilised age and sex data to outline the strikingly different demographic profiles of two distinct groups within the community - the strictly Orthodox, and everybody else. 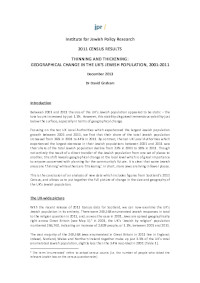