The third report in the series on the 2011 UK Census, based on age and sex data for Jews in England and Wales. It outlines the strikingly different demographic profiles of two distinct groups within the community - the strictly Orthodox, and everybody else.

The first report, published in December 2012, looked at the UK Jewish population at Local Authority (LA) level, and noted that whilst the size of the Jewish population of England and Wales has remained largely static since 2001, there are significant changes taking place at the local level. Our second report, published in February 2013, also focused on geography, and examined the changes that have taken place at the neighbourhood level.

This third report in the series investigates data released by the Office for National Statistics (ONS) in July 2013, covering age and sex by religion. 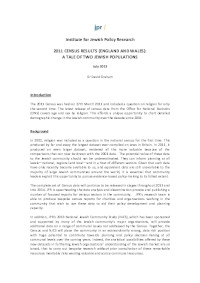