The second report in a series on the 2011 UK Census based on ward level data. It examines Jewish population numbers at the neighbourhood level, and gives detailed statistics on where Jewish populations are growing, and where they are in a clear state of decline.

The first report, published in December 2012, looked at the UK Jewish population at Local Authority (LA) level, and noted that whilst the size of the Jewish population of England and Wales has remained largely static since 2001, there are significant changes taking place at the local level.

This second report in the series investigates data released by the Office for National Statistics (ONS) in January 2013, which shows population size of all major religious groups down to ward level. 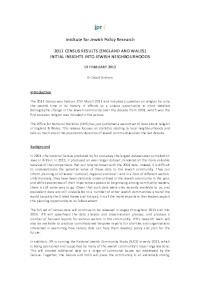