Depending on the study, anti-Semitic attitudes are to be encountered in 10 to 25 percent of the
population. The Swiss Federation of Jewish Communities (SIG) and the Foundation against
Racism and Anti-Semitism (GRA) show in their Anti-Semitism report for 2016 what happens
when attitudes become actions.

In 2016, the year under report, serious incidents were recorded from the spectrum of the extreme
Right: In October 2016, in Toggenburg, a concert was held featuring some notorious neo-Nazi
bands. According to media reports, around 5000 people attended the event.

A number of the bands appearing included songs with anti-Semitic content in their repertoire;
photos of the event show concertgoers giving the Hitler salute. A serious event likewise came to
light in October 2016: In one of their songs, members of a neo-Nazi band made death threats
against the SIG President and members of the SIG management. They also warned of bomb
attacks on Jewish institutions in Zurich.

In July the SIG received an E-mail containing blackmail threats. Jews were held responsible for
all the world’s misfortunes. The unknown sender demanded a large amount of money from the
SIG. If the SIG failed to pay up, the blackmailer threatened that “Jewish people in Switzerland will
bear the consequences”. Two incidents of physical violence occurred in Zurich: At a football
ground two Jewish youngsters asked other footballers if they could join in. The answer was:
“You’re Jews. There’s nothing here for Jews. S**t Jews”. The two Jewish youngsters were then
spat on. As they left they were followed by jeers of “Heil Hitler”. Again in Zurich, in April a Jewish
boy was the victim of massive anti-Semitic invective in the street and was spat on as he rode his
bicycle past three young people.

As the focus of his contribution the historian Daniel Rickenbacher, under the title “When hatred of
Jews creates unity”, looks at the cross-front phenomenon in Switzerland. Cross-fronts is the term
coined to describe associations which are formed between groups who are at opposite ends of
the political spectrum. Rickenbacher shows that in Switzerland informal interaction exists
between groupings on the Left, the Right, and Islamists. According to Rickenbacher, the
embedding of anti-Semitism in a range of different political spectra provides the basis for groups
to find common ground who would otherwise be assumed to be in complete opposition.

Note that this report only appears as a selection of webpages. They are collated as downloadable pdfs on this page, together with an English summary 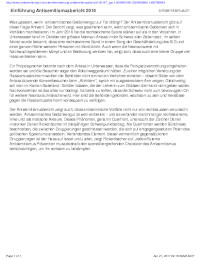 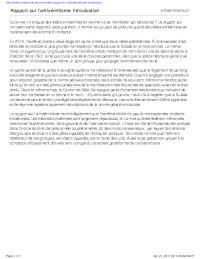 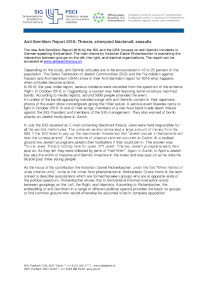