Is There a Future for Jews in Switzerland?

Swiss Jewry seems to be set for steady decline. There are today some eighteen thousand Jews in Switzerland-the same number as in 1900, whereas the general population has doubled since then. Assimilation and emigration, mainly to Israel, have reduced the Jewish population.
Jewish numbers were never high in Switzerland although many Jewish communities existed there in the Middle Ages. A pattern began in 1348 when many cities in the territories of what was to become the Swiss Confederacy murdered their Jews and expelled the survivors.
Jews were denied entry and residence for many centuries. By the seventeenth century a small Jewish population had been established in Swiss-conquered areas. The French occupation of 1798 bolstered the Jewish presence. Discrimination, however, continued until outside pressure led to emancipation in 1868-1874.
After World War I Jewish immigration was made impossible, culminating in the anti-Jewish refugee policy during World War II. In the postwar period Swiss Jews experienced a new acceptance and prosperity despite demographic weakness. More recently a largely homemade anti-Semitism has arisen that gained momentum with the restitution debate of the 1990s.

Is There a Future for Jews in Switzerland?

Erlanger, Simon Is There a Future for Jews in Switzerland?. Jerusalem Center for Public Affairs. March 15 2007:  https://archive.jpr.org.uk/object-swi1
Result from 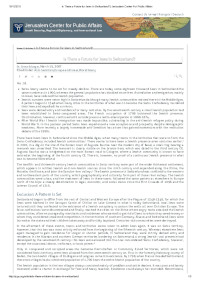