The Chief Rabbi’s View on Jews and Poland

At least twenty thousand Jews live in Poland. The two leading organizations, the Union of Jewish Communities and the Cultural and Social Association of Jews, each have about two thousand members.
The subject of Jews and Poland involves three interrelated matters. The first concerns what is currently happening to the Jews living in Poland. The second is Poland’s Jewish heritage, including its physical remnants: cemeteries, synagogues, communal and private property. The third has to do with the nature of Polish- Jewish relations.
Poland is still in a major state of flux. Since 1989, official Poland has wanted to reexamine its relations with the Jews. The main reasons for this are the teachings of Pope John Paul II, Poland’s admiration for the United States, and the rejection among the younger generation of everything their parents and grandparents stood for.
Although the main government force, the Law and Justice Party, is not anti- Semitic, the coalition now contains an anti-Semitic party, the Polish Families League, whose leader, Roman Giertych, is deputy prime minister and minister of education. This poses many dilemmas for the Jewish community, and Israel is boycotting Giertych.

The Chief Rabbi’s View on Jews and Poland 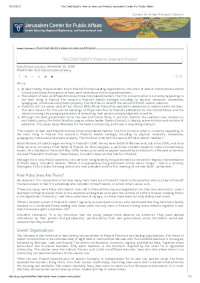