Why We Stayed: Poland's Remaining Jews’ Experiences, Identities, and Reasons for not Emigrating, 1939-2018

In the 1980s, it seemed to most observers that Poland's Jewish community was on the way out. Of a prewar Jewish population of 3.3 million, it had been reduced to just 5,000 mostly elderly Holocaust survivors. After the fall of communism in 1989, a revival of Jewish life occurred in Poland. Suddenly, it turned out that there were many more Polish Jews than anyone had previously thought. Why did some Polish Jews stay in Poland while many others emigrated, especially after two major waves of Jewish emigration (immediately after the war and in 1967-1968)? In this oral history MA thesis, I interviewed five Polish Jews, Holocaust survivors who had never left Poland, for their answers to this question.

PDF (via academia.edu), Why We Stayed: Poland's Remaining Jews’ Experiences, Identities, and Reasons for not Emigrating, 1939-2018
Further publications by Filip Mazurczak

Mazurczak, Filip Why We Stayed: Poland's Remaining Jews’ Experiences, Identities, and Reasons for not Emigrating, 1939-2018. Columbia University. 2018:  https://archive.jpr.org.uk/object-pol112
Result from 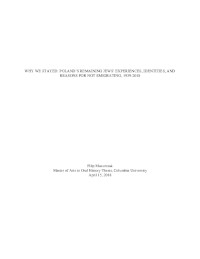