Being Jewish in 21st-Century Germany

An unexpected immigration wave of Jews from the former Soviet Union mostly in the 1990s has stabilized and enlarged Jewish life in Germany. Jewish kindergartens and schools were opened, and Jewish museums, theaters, and festivals are attracting a wide audience. No doubt: Jews will continue to live in Germany. At the same time, Jewish life has undergone an impressing transformation in the second half of the 20th century– from rejection to acceptance, but not without disillusionments and heated debates. And while the ‘new Jews of Germany,’ 90 percent of them of Eastern European background, are already considered an important factor of the contemporary Jewish diaspora, they still grapple with the shadow of the Holocaust, with internal cultural clashes and with difficulties in shaping a new collective identity. What does it mean to live a Jewish life in present-day Germany? How are Jewish thoughts, feelings, and practices reflected in contemporary arts, literature, and movies? What will remain of the former German Jewish cultural heritage? Who are the new Jewish elites, and how successful is the fight against anti-Semitism? This volume offers some answers.

Preface: A Word from the Editors of this Volume - 1

Michael Wolffsohn: Jews in Divided Germany (1945–1990) and Beyond Scrutinized in Retrospect  13
Michael Elm: The Making of Holocaust Trauma in German Memory: Some Reflection about Robert Thalheim’s Film And Along Come Tourists  31
Julius H. Schoeps: Saving the German-Jewish Legacy?On Jewish and Non-Jewish Attempts of Reconstructing a Lost World  46

Eliezer Ben-Rafael: Germany’s Russian-speaking Jews: Between Original, Present and Affective Homelands  63
Julia Bernstein: Russian Food Stores and their Meaning for Jewish Migrants in Germany and Israel: Honor and ‘Nostalgia’  81
Elke-Vera Kotowski: Moving from the Present via the Past to Look toward the Future: Jewish Life in Germany Today  103
Fania Oz-Salzberger: Israelis and Germany: A Personal Perspective  117

Ghosts of the Past, Challenges of the Present: Germany Facing Old-New Anti-Semitism

Towards New Shores: Jewish Education and the Religious Revival 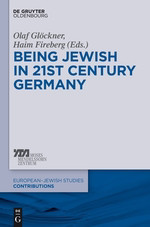