Besides being a confusing designation, culture is
a contentious issue. Nevertheless, people depend
on the relatively safe and stable entity called
culture, which both aids and encumbers them as
they negotiate their way in society

Conventionally, religious beliefs and practices
have been the main symbols of collective Jewish
identity; their development and legitimation have
been profoundly embedded in group life, social
class and organizations. ln the Jewish Diaspora,
these beliefs and practices were the 'mortar' that
cemented the 'Jewish' bricks. However, as
European societies have modernized and become
more secular, more pluralistic and multicultural,
Jews have had to adapt. But European Jewish
communities do not stand in isolation and the
issue is not simply 'modernize and die' or
'modernize or die'-secularism v. religion.
European Jewish communities, in their struggle to
survive and create Jewish identities with which
they are at ease, must contend with new streams
of Jewish life emanating from North America and
lsrael. With the exception of France and the
United Kingdom, which still have relatively large
and viable-and autonomous-Jewish
communities, most European communities are
small with consrderable need of external support

Debate on culture is taking place among Jews in
terms of the nature and content of Jewish
cultures. But Jewish cultures are changing, as
they have always done; this fact is most evident
in both lsrael and North America.
lf European Jewish communities are to survive
and prosper as autonomous entities without being
over-influenced by any one ideological or religious
tendency in the Jewish world, or without fear of
assimilation, they must be sufficiently brave to
develop their own means of self-expression and
to learn to live with them. This is not an easy task,
because those who offer single-track alternatives
-such as the dissolution of the Diaspora or a
return to a form of Judaism which isolates itself
from the rest of society-do so with forceful
conviction. European Jews must be able to
develop an independent and vibrant culture.
The construction of forward-looking European
Jewries will be hampered by attempts at
delegitimization. Many accusations-e.g. that it is
not the traditional way, that it is against the overall
Jewish interest-will probably be aimed at efforts
by European Jewry to set its own course for
survival. However, if European Jewish
communities are to avoid irreversible decline,
there is no other way. The present offers a golden
opportunity to communities of European Jews to
co-operate across national boundaries and develop
coalitions with other ethnic groups, and cultural
and religious minorities, so that they can be leaders
rather than hangers-on in the era of multiculturalism.
It is an opportunity not to be missed.

Publication contains English, German and Russian translations of the summary.This is a French translation of the original English report. 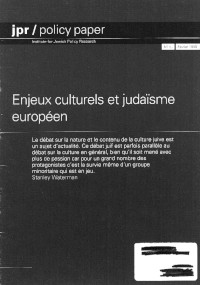