This paper describes and analyzes the multiple ethnic identities
and identifications among first-generation Jewish Israeli immigrants
in Europe, and specifically in London and Paris, by means of closedend
questionnaires (N=114) and in-depth semi-structured interviews
(N=23).

Israelis who live in Europe are strongly attached to Israel and are
proud to present themselves as Israelis. Despite their place of residence,
these Israelis, particularly those residing in London and over the age
of 35, manage to find ways to preserve their Israeli identity. They also
perceive the need to expose their children to other Israelis as another
means of preventing assimilation. On the other hand, those who are
under the age of 35, and in particular those residing in Paris, have less
opportunity or less need to maintain their Israeli identity in Europe.
The older Israelis in London are also somewhat more integrated with
the proximal host and have a stronger Jewish identity than do younger
Israelis, particularly those residing in Paris. Living in Europe allows
Israelis to flourish economically without having to identify with or
belong to a cultural and social ethnic niche. The ethnic identity of
first-generation Israeli immigrants in Europe is multifaceted. While it
is primarily transnational, it is also dynamic and constantly changing
though various interactions and is, of course, susceptible to current
local and global political and economic events. For younger Israeli
immigrants, assimilation into the non-Jewish population appears to be
a possible form of identity and identification. This assimilation may be
moderated among young adults who build bridges with local Jewish
communities in tandem with their transnational formal connections
with Israel, a process that can benefit both sides. Such a process - the
reconstruction of ethnic Israeli-Jewish identity and collaborative
identification with local Jews - has the potential to strengthen and
enhance the survivability of European Jewry at large. 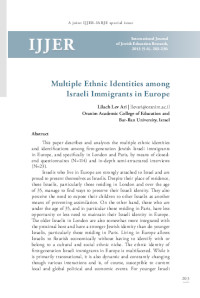