The question of whether there is a Jewish identity that is at once common to all European Jews but also peculiar to them, has intrigued scholars of contemporary Jewry since the fall of the Berlin Wall. This study contrasts the European picture with the two major centres of world Jewry, the United States and Israel, and examines the nature and content of Jewish identity across Europe, exploring the three core pillars of belief, belonging and behaviour around which Jewish identity is built.

This research was made possible by the advent of the EU Agency for Fundamental Rights (FRA) survey in 2012 examining Jewish people’s experiences and perceptions of antisemitism across nine EU Member States: Belgium, France, Germany, Hungary, Italy, Latvia, Romania, Sweden and the UK. As well as gathering data about antisemitism, the study investigated various aspects of the Jewishness of respondents, in order to ascertain whether different types of Jews perceive and experience antisemitism differently. This study focuses on the data gathered about Jewishness, thereby enabling direct comparisons to be made for the first time across multiple European Jewish communities in a robust and comprehensive way.

The report concludes that there is no monolithic European identity, but it explores in detail the mosaic of Jewish identity in Europe, highlighting some key differences:
• In Belgium, where Jewish parents are most likely to send their children to Jewish schools, there is a unique polarisation between the observant and non-observant;
• In France, Jews exhibit the strongest feelings of being part of the Jewish People, and also have the strongest level of emotional attachment to Israel;
• Germany’s Jewish community has the largest proportion of foreign-born Jews, and, along with Hungary, is the youngest Jewish population;
• In Hungary the greatest relative weight in Jewish identity priorities is placed on 'Combating antisemitism,' and the weakest level of support for Israel is exhibited;
• In Italy, respondents are least likely to report being Jewish by birth or to have two Jewish parents;
• The Jews of Latvia are the oldest population and the most likely to be intermarried;
• The Jews of Sweden attach a very high level of importance to 'Combating antisemitism' despite being relatively unlikely to experience it, and they observe few Jewish practices;
• In the United Kingdom, Jews observe the most religious practices and appear to feel the least threatened by antisemitism. They are the most likely to be Jewish by birth and least likely to be intermarried.

According to report author, Dr David Graham: “This report represents far more than the culmination of an empirical assessment of Jewish identity. Never before has it been possible to examine Jewish identity across Europe in anything approaching a coherent and systematic way. Prior to the FRA’s survey, it was almost inconceivable that an analysis of this kind could be carried out at all. The formidable obstacles of cost, language, political and logistical complexity seemed to present impenetrable barriers to the realisation of any such dream. Yet this is exactly what has been achieved, a report made possible through an FRA initiative into furthering understanding of Jewish peoples' experience of antisemitism. It reveals a European Jewry that is more mosaic than monolith, an array of Jewish communities, each exhibiting unique Jewish personas, yet united by geography and a common cultural heritage."

Discrimination and hate crime against Jews in EU Member States: experiences and perceptions of antisemitism (Other)

Link to article including link to pdf, European Jewish identity: Mosaic or monolith? An empirical assessment of eight European countries 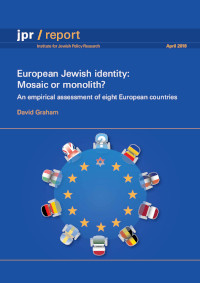