Antisemitic propaganda has as its goal to energize and attract followers. Antisemitic propaganda is also used to tarnish political opponents in the eyes of a specific audience by intimating that someone is Jewish, supportive of Jewish causes or of the State of Israel. Other times, political opponents are slandered as antisemites or Nazis to diminish their reputations with specific audiences. Each of these techniques will be covered in this report, which focuses on the conscious choice of instrumentalizing or tolerating antisemitism for political gain. Antisemitic rhetoric by political actors as an indicator of bias is a much broader topic, and this report does not cover those instances.

Why is this report important? While violent antisemitic attacks receive wide publicity – and rightly so – the politicization of antisemitism can also severely impact Jewish communities. The British Jewish community provides a compelling example.

In January 2015, 11% of British Jews were considering emigrating, according to a poll by the UK’s Jewish Chronicle. That survey was conducted before Jeremy Corbyn, widely regarded within the British Jewish community as an antisemite himself, was even a leadership candidate for the Labour party. In September 2018, after antisemitism had become a serious problem in the Labour party under Corbyn, the Jewish Chronicle poll found that 39% of British Jews were considering emigrating. And in an October 2019 poll by the UK’s Jewish Leadership Council, just prior to the UK General Election, 47% of British Jews said they would “seriously consider” leaving the UK if Jeremy Corbyn were to win the election.

Had Jeremy Corbyn won, leading a major party widely recognized as tolerating antisemitism among its members, and had even 30% of British Jews emigrated as a result of that single event, that number of roughly 90,000 Jews would have been similar to the total of all the French Jews who left France over the past 20 years.

The sections below are select examples of the different ways in which antisemitism has been instrumentalized for political gain by various actors. The purposes and tactics vary substantially, but have the common element of politicizing antisemitism:

The Russian government instrumentalized antisemitism in the forms of propaganda and “false flag” operations to influence domestic and foreign public opinion in its conflict with Ukraine.
Polish political campaigns used overt antisemitic rhetoric during elections to win votes.
The Hungarian government used coded antisemitism in political campaigns against EU migration policies.
The UK Labour party consciously tolerated antisemitism to widen its political support from far-left radicals.
Ukrainian nationalists glorified World War II era fighters to promote nationalist narratives, while trivializing their involvement in the Holocaust.
The far-right Alternative for Germany party trivialized the Holocaust as part of their appeal to “Holocaust fatigue” among German voters.
Other political actors have engaged in similar acts of politicization, and their absence from this report is not indicative of any assessment. The cases below are simply the most blatant examples of the types of politicization to be highlighted.

Link to article including link to pdf, Choosing Antisemitism: Instrumentalization and Tolerance of Antisemitism in Contemporary European Politics. 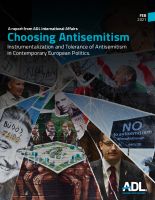