The 1,652 antisemitic incidents CST recorded in 2018 represent a 16 per cent rise from the 1,420 incidents recorded in 2017. These 1,652 incidents were spread throughout the year, with over 100 incidents recorded in every month for the first time in any calendar year; indicating that a general atmosphere of intolerance and prejudice is sustaining the high incident totals, rather than a one-off specific ‘trigger’ event. In addition to more general background factors, the highest monthly totals in 2018 came when the problem of antisemitism in the Labour Party was the subject of intense discussion and activity, or when violence surged temporarily on the border between Israel and Gaza; suggesting that these events, and reactions to them, also played a role in 2018’s record total.

The highest monthly totals in 2018 came in May, with 182 incidents; April, with 151 incidents; August, with 150 incidents; and September, with 148 incidents. It is likely that these higher monthly totals were partly caused by reactions to political events in the UK and overseas, involving the Labour Party and violence on the border of Israel and Gaza, during those months.

Link to article including link to pdf, Antisemitic Incidents Report 2018 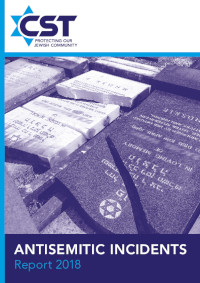