Antisemitic incidents recorded by CST occurred more in the first six months of 2017 than in the second half of the year. The highest monthly total in 2017 came in January with 155 incidents; the second highest was in April with 142 incidents; and the third highest was in February with 134 incidents reported. Every month from January to October, CST recorded a monthly incident total above 100 incidents. This continued an utterly unprecedented sequence of monthly totals exceeding 100 antisemitic incidents since April 2016, a run of 19 consecutive months. There were 89 incidents recorded in November and 78 in December. There is no obvious reason why November and December 2017 saw an end to this sequence, although historically CST has usually recorded fewer antisemitic incidents in December in comparison to other months. It is too soon to predict whether this decline in monthly incident totals towards the end of 2017 marks the beginning of a downward trend from the sustained highs of the past two years.

Previous record high annual totals in 2014 and 2009 occurred when conflicts in Israel and Gaza acted as sudden trigger events that caused steep, identifiable ‘spikes’ in antisemitic incidents recorded by CST. In contrast, in 2017 (as in 2016) there was not a sudden, statistically outlying large spike in incidents to cause and explain the overall record high. 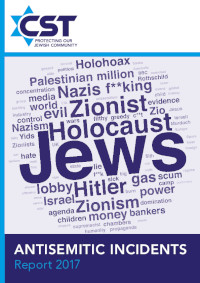