Synagogue membership in the United Kingdom in 2016

This study, which was produced by JPR on behalf of the Board of Deputies of British Jews, takes an in-depth statistical look at synagogue membership figures in the UK. Synagogue membership data have been gathered and analysed consistently over several decades, and constitute the best measure of Jewish communal affiliation in the UK that exists. They provide the only consistent indicator of patterns of Jewish affiliation and belonging over time, and are thus of particular interest to community leaders and planners.

The report, authored by JPR researchers Dr Donatella Casale Mashiah and Dr Jonathan Boyd, finds that despite the fact that there are now 454 synagogues in the UK – the largest number ever recorded – synagogue membership numbers have dropped below 80,000 households for the first time since records began. Indeed, there has been a 20% decline over a quarter of a century, and a 4% decline since the last such report was published in 2010.

However, the overall decline masks important developments at a denominational level. Critically, the sector that has declined most sharply is central Orthodoxy – broadly understood as the United Synagogue, the Federation and various independent modern Orthodox synagogues dotted around the country – which collectively have seen a 37% drop since 1990. This decline is partly due to disaffection, but it has also been driven considerably by natural decrease – more members dying than being born.

In contrast, membership of strictly Orthodox synagogues is growing. Indeed, it has grown dramatically over time – by 139% since 1990. A generation ago, the strictly Orthodox comprised 4.5% of all synagogue members households; today they comprise 13.5%. This growth is driven almost exclusively by demographic forces – particularly, high birth rates in this sector of the community.

Taken as a whole, Liberal, Reform and Masorti figures have been fairly stable over time. Liberal and Reform have both declined slightly since 1990, whereas Masorti has grown, albeit from a lower base. But this overall picture of stability is somewhat misleading: in reality, Liberal and Reform synagogues are both losing members at a similar rate to the central Orthodox ones, but unlike those central Orthodox ones, they are also attracting members from their religious ‘right’ to offset those losses. 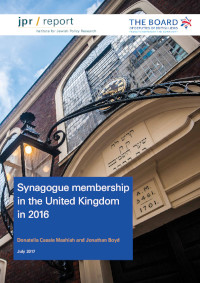