Reproducing moral agents: The concept of human nature in an orthodox Jewish community.

The theoretical emphasis in this thesis is on the ideas that people have regarding
the sociocultural construct of human nature. Regarded as a construct whose form
and content is intrinsically connected to economic, historic and sociocultural factors,
the thesis attempts to explain how specific circumstances have caused the orthodox
Jewish community of Gateshead to re-negotiate and crystallize the concept of
human nature in their quest to live ethical and moral lives. In the last fifty years
this community has become known as a prominent centre for higher rabbinical
studies and attracts students from all over the world. Apart from its high
intellectual standards it has also gained a reputation as harbouring members who
are devoted to inter-personal ethics. The contention of this thesis is that the
community's level of compliance to such behaviours requires an awareness and a
well-defined notion of one's "inner" self and its various components that govern the
process of moral and ethical conduct.
Underpinning a wide range of sociocultural activities the thesis deals in particular
with the way in which ideas of human nature are inherent to the content and form
of indigenous educational theory. The process of child-rearing not only ensures the
reproduction of competent sociocultural members, it also aids the child in acquiring
an understanding of its "inner" self. The latter is in Gateshead defined as the locus
of personal and individual responsibility and is consequently vital in making the child
aware of its potentiality for moral conduct.
By carefully analyzing mother-child interactions it is revealed how the structure and
content of these interactions are organized by and expressive of inherent ideas
concerning the concept of human nature. Through active participation in these
interaction sequences the child is provided with an opportunity to construct and
acquire an understanding of itself as a moral agent.

Link to download in university repository, Reproducing moral agents: The concept of human nature in an orthodox Jewish community. 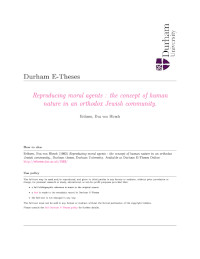