The Attitudes of British Jews Towards Israel

The research found that Israel plays a central role for British Jews, with 93% saying the Jewish state plays a “central”, “important” or “some” role in their Jewish identity, and 90% supporting Israel’s right to exist as a Jewish state. It reflected significant concerns about the security situation in Israel with many respondents ambivalent about withdrawal from the West Bank because of security concerns (50% vs 33% support the proposition that “Israeli control of the West Bank is vital for Israel’s security”), despite commitment to a two-state solution.

75% stated that settlement expansion formed a “major” obstacle to peace. 68% endorsed the statement “I feel a sense of despair every time Israel approves an expansion of the settlements”.
73% felt that Israel’s current approach to the peace process has damaged its standing in the world.
There is strong support for Israel to “cede territory” in order to achieve peace (62% for, 25% against). But if withdrawal is seen as posing a risk to Israel’s security, the majority then oppose withdrawal (50%:33%).
61% felt that the Israeli government’s first priority should be “pursuing peace negotiations with the Palestinians. 64% felt they had the right to judge Israel’s actions though they do not live there.
58% agree with the statement that Israel “will be seen as an apartheid state if it tries to retain control over borders that contain more Arabs than Jews” (22% disagree).
Almost 80% of respondents consider that, in the context of the conflicts raging around the world, those who condemn Israel’s military actions “are guilty of applying double standards”.
“Hawks” on Israel significantly overestimated how widely their views were shared by a factor of two while “doves” underestimated theirs by 10%. British Jews who believe Palestinians have no claim to own land think their views are shared by 49% of British Jewry, despite the actual figure being 14%.
Hannah Weisfeld, director of Yachad said of the findings of the report:

“The community is shifting. Feelings of despair, conflict between loyalty to Israel and concern over policies of the government are mainstream not marginal positions. The research shows we are more willing to speak out on these issues than ever before. Members of Anglo-Jewry who have previously been afraid to give voice to their concerns over Israeli government policy, should realise that they are in fact part of the majority.

This is against the backdrop of a Jewish community that remains fully committed to Israel and its centrality to Jewish identity.”

Committed, Concerned and Conciliatory: The attitudes of Jews in Britain towards Israel (Other)

The Attitudes of British Jews Towards Israel 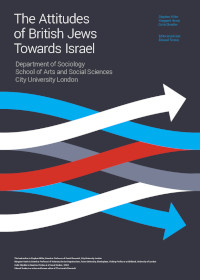