Committed, Concerned and Conciliatory: The attitudes of Jews in Britain towards Israel

The Israel Survey is a landmark study in British Jewish research. Based on the largest national sample of British Jews ever constructed, it paints a detailed portrait of the place of Israel in Jewish identity, and clearly demonstrates how Jews in Britain feel about some of the key political issues facing the country.

It is clear from the findings that Israel constitutes an important part of British Jews' sense of self, which goes some way towards explaining why it can be such a contentious topic when discussed in the public realm. It also demonstrates that the vast majority of Jews in Britain regard Israel as the ancestral homeland of the Jewish People, and many have close familial or social ties with Israelis.

However, the British Jewish population is far from uniform in its views about social and political issues in the country. Opinions differ greatly, but taken as a whole, a clear majority is both pro-security and pro-peace - eager to see Israelis living free from the threats of extremism and violence, and eager to see the country reach a peaceful settlement with the Palestinians.

The study was commissioned by Pears Foundation as part of itscommitment to ensure that policy debate should be based on empirical research. An extended methodological report is available on request to researchers associated with JPR.

The Attitudes of British Jews Towards Israel (Response) 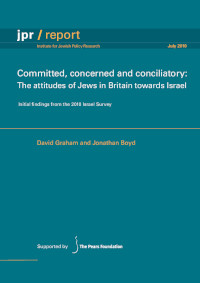