There are an estimated two million Muslims in the United Kingdom. The largest communities come from the Indian subcontinent, in the following order: Pakistan, Bangladesh, India. The Jewish community numbers approximately three hundred thousand.
Despite outward appearances there is a broad range of Jewish-Muslim dialogue groups and other kinds of interaction. This includes cultural associations, religious dialogues-in which sometimes Christians are also involved-as well as interaction on the local level between synagogues and mosques.
On the other side of the spectrum there are many violent attacks by Muslims on Jews. Among identified perpetrators of violent incidents, Muslims number much higher than their share of the population. The main sources of Muslim antisemitic hate propaganda are in certain Islamic groups, madrassas, and mosques. Some campuses have become hostile environments for Jews openly identifying with Israel.
On some religious issues such as circumcision Muslims and Jews have common interests. On others, such as the introduction of religious law, their positions greatly diverge. 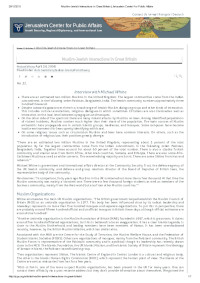