Could it happen here? What existing data tell us about contemporary antisemitism in the UK

In the aftermath of the spike in antisemitic incidents during the war in Gaza in summer 2014, and the Islamist attacks on Jews in Brussels, Paris and Copenhagen, there is growing concern about rising antisemitism in Europe. Yet, as this paper shows, existing data present a complex and multi-faceted picture of reality, proving some existing hypotheses beyond any reasonable doubt, but challenging others.

It is clear, for example, that spikes in antisemitic incidents occur when war breaks out in Gaza – all data sources from multiple countries and both Jewish and non-Jewish sources show this. However, it is far less clear whether or not levels of antisemitism are rising over time in the UK: different sources of data tell competing stories, and the absence of trend data on patterns of reporting among British Jews makes it difficult to draw any firm conclusions. We can see that antisemitic sentiment is particularly strong among certain sub-groups within the population, but we can also see that, taken as a whole, British adults hold largely favourable attitudes towards Jews, at levels that place Britain among the least antisemitic countries in the world.

Nevertheless, the data indicate that significant proportions of Jews in the UK and elsewhere are concerned about antisemitism. But it is evident that more work needs to be done to understand the targets of this concern – where the threats lie, and the nature and scale of the problems that exist.

In general, the report maintains that research data on antisemitism in the UK vary in quality, and despite a recent flurry of research activity, many of the outputs seem to generate far more heat than light. We argue that much more work needs to be done in coordinating research efforts, maximising the value of existing datasets, focusing on the areas of greatest concern, and ensuring that any data collected and analysed are strongly concentrated on the most important policy questions: understanding the threat, and providing genuine policy insights for international, national and Jewish communal leaders, as well as Jews more generally.

Could it happen here? What existing data tell us about contemporary antisemitism in the UK

Boyd, Jonathan, Staetsky, Daniel L. Could it happen here? What existing data tell us about contemporary antisemitism in the UK. Institute for Jewish Policy Research. May 2015:  https://archive.jpr.org.uk/object-uk209
Result from 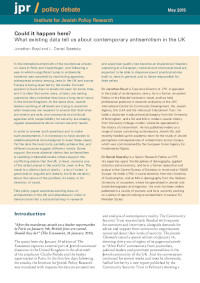