Jews in Britain: A snapshot from the 2001 Census

In May 2007 JPR launched Jews in Britain: A Snapshot from the 2001 Census, which was given extensive coverage in the national and international media and the Jewish press. It laid bare the complexity of the Jewish population and demolished several popular myths: ‘the Jewish nuclear family, the homogenous Jewish household, the Jewish housewife, the married Jewish couple or the universally successful and prosperous citizen.’

Over 120 pages long, the report covers a wide range of subjects, including the nature of Jewish partnerships, intermarriage, living standards, social inequality, ethnicity, educational standards and many other demographic issues. ‘Our understanding of the British Jewish population has been revolutionized’, concluded the authors of JPR's comprehensive analysis of the data on Jews derived from answers to the first ever voluntary question on religion in the 2001 Census. ‘The results have been truly fascinating and mould-breaking.’ A debate has now been started which, JPR hopes, will provoke an extensive and much-needed examination into the nature of the Jewish community in Britain and its future needs. 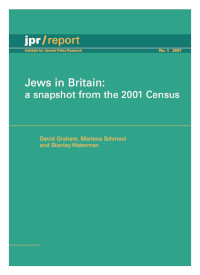