In 2015, SIG and GRA registered 14 anti-Semitic incidents in German-speaking Switzerland.
This is significantly less than in 2014: in that year 66 incidents were registered. As in previous
years, in 2015 the actual quantity of anti-Semitic hatred on the internet was not recorded;
however there was a noticeable tendency towards less anti-Semitic hatred than in the previous
year.
As in 2014, two anti-Semitically motivated physical attacks were registered in the reporting year.
On one occasion, Jewish adolescents were physically attacked in Zurich by adolescents of the
same age - in the second case, it was neo-Nazis who also attacked a Jew in Zurich.
However, this drop in the number of registered incidents should not be taken as a sign of any
corresponding reduction in the level of anti-Semitic sentiment.
The study "Living Together in Switzerland", conducted on behalf of the centre for anti-racism and
published early in 2015, reveals that the spread of anti-Semitic sentiment across the broad
spectrum of society is, at around 10% of the Swiss population, relatively stable. This sentiment
often remains hidden and emerges in surges, sparked off by 'trigger events' such as conflict
between Israel and Palestinians. This was particularly apparent in 2014. While the Israeli military
deployment in Gaza was a response to rocket attacks on Israel, the number of anti-Semitic
incidents accelerated, only to drop quickly again afterwards. A further point to make is that
criticism of Israel's policies is not regarded explicitly as a form of "anti-Semitic incident", whereas
statements such as "all Jews should be gassed" are.
In 2015, there was no military escalation with Israeli involvement such as in 2014 and also no
other trigger events. This could well be the main reason for the lower number of registered
incidents. As in previous years, the actual number of incidents is most probably higher, because
many incidents go unreported.
In autumn 2015, there were numerous knife attacks by Palestinians on Jewish Israelis in Israel.
This also led to anti-Semitic comments in Switzerland, for example on Facebook, which glorified
the perpetrators as heroes. However, there was no heightened activity, as in 2014 during the
Gaza War, when Facebook hatred-mongers whipped each other up and tried to outdo each
other.
In 2014, SIG and GRA brought 25 criminal charges against individuals making hate statements
about Jews on Facebook. In the cases were it was possible to unmask the perpetrators, they
were found to have breached the anti-racism penal code. However, many cases against
unidentifiable Facebook hatred-mongers had to be abandoned. Also, other institutions and
private individuals brought dozens of other charges. SIG and GRA do not know the outcomes of
these proceedings.
2/2
It cannot be ruled out that these charges and media reports about them in 2014 led to fewer and
less drastic hate statements against Jews on Swiss Facebook pages in 2015 than in previous
years. In summer 2015, hate statements on the net became a broad subject of media attention in
connection with the refugee crisis. This debate, too, could have led to the sensitization of many
people. Today, it may well be true that more people than in the past are aware that racist and
anti-Semitic hatred in the internet can be a criminal offence.
The fact that 2015 also saw not only written and verbal attacks but also physical assaults on
Jews shows that anti-Semitic sentiment can still lead to physical violence on occasion.
Such as, in summer 2015, more than 20 neo-Nazis turned up in Zurich-Wiedikon and attacked an
orthodox Jew. They insulted him, spat at him, and jostled him. This may well have had a more
serious outcome, but for the energetic interventions of passers-by and the police. Another
incident took place at a football pitch in Zurich. Young footballers from a Jewish football
association were insulted anti-Semitically, jostled and finally beaten by other young people. The
perpetrators only left their victims in peace when passers-by got involved. The perpetrators then
fled the scene unidentified.

Note that this report only appears as a selection of webpages. They are collated as downloadable pdfs on this page, together with an English summary 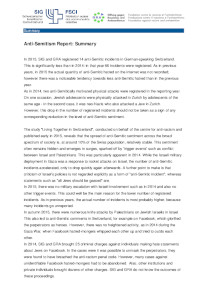