The Holocaust (Shoah) Immovable Property Restitution Study is the first-ever comprehensive
compilation of all significant legislation passed since 1945 by the 47 states that participated in
the 2009 Prague Holocaust Era Assets Conference and endorsed the 2009 Terezin Declaration
that came out of the Prague conference.

The Terezin Declaration (and its companion document, the 2010 Guidelines and Best Practices,
endorsed by 43 countries) focuses in substantial part on the treatment of immovable (real)
property restitution: private, communal, and heirless property. The Study examined private,
communal, and heirless property as discrete components of each country’s restitution efforts
from 1944 to 2016.

Poland is one of a handful of countries with a government office dedicated to Jewish
Diaspora and post-Holocaust issues. As of March 2016, Mr. Sebastian Rejak holds the
post of Special Envoy of the Polish Minister of Foreign Affairs for Relations with the
Jewish Diaspora.

As part of the European Shoah Legacy Institute’s Immovable Property Restitution Study,
a Questionnaire covering past and present restitution regimes for private, communal and
heirless property was sent to all 47 Terezin Declaration governments in 2015. As of 13
December 2016, no response from Poland has been received. 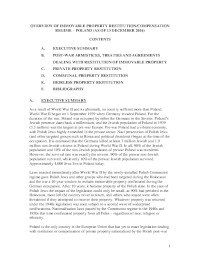