Insights into the Situation of the Jews in the Netherlands

Demographic research by the Jewish social organization JMW shows that three-quarters of the Dutch Jewish community, which numbers about 30,000, is not organized in one of the three religious organizations-the Ashkenazi, Progressive, and Portuguese. Among other things, this means they do not send their children to a Jewish school and, if they are ill, do not go to the Jewish hospital. Close to half of the Jews live in Amsterdam and the adjacent southern suburb of Amstelveen.
The immigration of Muslims and the rise of Islam in the Netherlands have created problems for the Jewish community and will continue to do so. There are about one million Muslims in the Netherlands. Their influence on the political system is increasing. This cannot be positive for the Jews. The more power the Muslim community gains, the more it will weaken the Jewish community’s relations with a number of ministries.
The Jewish community faces increasing anti-Semitism. This has led to enhanced security measures. It also threatens to intensify attitudes based on fear.
An important element in Dutch Jewish history over the past decade was the restitution negotiations. As a result, the Dutch government made a payment of 400 million guilders (180 million Euros) to the Dutch community. Banks, insurance companies, and the stock exchange made additional payments that totaled 340 million guilders (155 million Euros).

Insights into the Situation of the Jews in the Netherlands

Markens, Henri Insights into the Situation of the Jews in the Netherlands. Jerusalem Center for Public Affairs. November 15 2009:  https://archive.jpr.org.uk/object-neth21
Result from 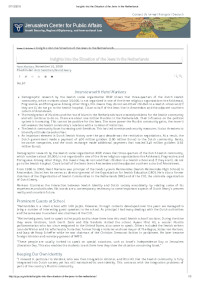