Jewish Pilgrimages Today: Restructuring of Pilgrimages to Miracle-Working Rabbis at the Turn of the Century

During the 19th-20th centuries several significant pilgrimage sites related to Jewish folk piety developed in the territory of historical Hungary. Mainly the pilgrimage traditions of Jewish communities living in thecountryside were active and diversified. In 1944 the Holocaust put an end to this intensive practice of pil-grimage. After World War II pilgrimage traditions were revived. However, by the middle of the 1950s the pil-grimage practice came to a complete end, due to the new social structure, as well as to the emigration of traditional Jewish communities surviving the Holocaust.Then in the 1990s, due to the religious revival characteristic of the age, Jewish pilgrimage practice of thekind also came to life again, nonetheless, by this time participating communities had changed, as well as par-allel practices and new interpretations had appeared within the tradition. Traditions related to mira-cle-working rabbis are just about to change in Jewish communities in Hungary, since the social structure of Jewish communities has also altered.Present paper discusses this presently changing tradition. 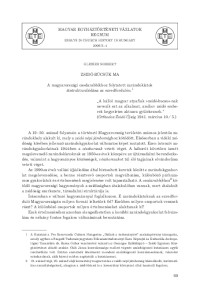