Negotiating A Diasporic Identity: The Jews In Thessaloniki

Since the ancient times, Jews used to be in a diasporic situation. While embracing new elements,
being in and out of their borders, in and out of their communities and regarding social, political and
economical factors of the place they lived in, the Jewish people were reconsidering and reconstructing
their ethnoreligious and cultural identity. In this paper, the contemporary Jewish identity will be
explored, —both individually and collectively— in the context of the pluralistic city of Thessaloniki,
Greece. Which are the components that their identity is compromised of? On the one hand, how
does the factor of their recent Sephardic (Judeo-Spanish) origin influence their identitarian reference?
On the other hand, how does the current state of Israel remodel and form new identitarian aspects
of them? And finally, how does the Greek context affect their personal, communal and national
identity? Living in a Greek secular state, where the majority of its citizens regard themselves as
Orthodox Christian believers, what relations might be shaped between the non Jews and the Jews?
How do the Jews perceive their self identity? By using empirical data of fieldwork, the writer will
endeavor to attribute the diasporic paths of the long term indigenous, Greek, Jewish identity —both
national and religious— in the geographical place of the city of Thessaloniki. 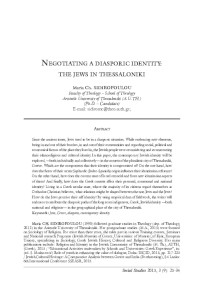