The economic downturn & the future of Jewish communities

In the aftermath of the economic crisis that swept across the world in 2008, Professor Jonathan Sarna, Professor of American Jewish History at Brandeis University and Chief Historian of the new National Museum of American Jewish History, gave JPR’s 2009 Morris and Manja Leigh Memorial lecture exploring how similar economic crises have affected Jewish life in the past.

Based on historical precedent, he argued that we should expect to see five trends: (1) Jewish organisations being merged into non-Jewish organisations; (2) new found efforts to re-engage small donors; (3) calls for higher standards of ethics and greater transparency in Jewish philanthropy; (4) a new focus on sweat equity; and (5) demographic decline and greater aliyah to Israel as unemployment rises.

Sarna further argued that “Once the economic downturn is behind us, the goal of formulating a new and compelling mission for our Jewish community needs to be high on our collective agenda.” 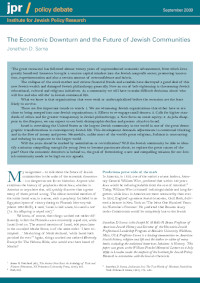