Antisemitism and Immigration in Western Europe Today. Is there a connection? The case of Germany

MENA migrants have been symbolically central to the migration debate since 2011. These years have been framed by the Arab spring and its aftermath and by Europe’s crisis of refugee protection. This research project has focused specifically on MENA migrants, in response to the intensity of this debate, and in accordance with the brief from Foundation EVZ. The central concern of the research project has been to investigate whether the arrival of MENA migrants since 2011 has had an impact on antisemitic attitudes and behaviour in Western Europe. This report deals with the case of Belgium. The report also considers whether government and civil society agencies have identified a problem of antisemitism among MENA migrants. The findings are based on an extensive survey of existing quantitative and qualitative evidence. Additionally, new qualitative research has been undertaken to investigate the experiences and opinions of a range of actors.

PDF, Antisemitism and Immigration in Western Europe Today. Is there a connection? The case of Germany
PDF, Executive summary in German

Berek, Mathias Antisemitism and Immigration in Western Europe Today. Is there a connection? The case of Germany. Stiftung EVZ, Pears Institute for the study of Antisemitism, University of London. April 2018:  https://archive.jpr.org.uk/object-ger251
Result from 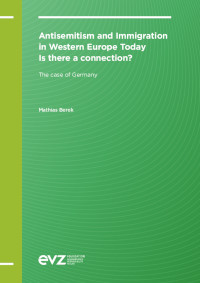 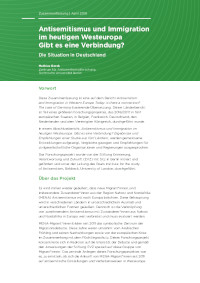