After the dissolution of Yugoslavia, the Jewish community within Yugoslavia was also split up, and now various Jewish communities exist in the seven post-Yugoslav countries. Although all of these communities are relatively small, their size, influence, and activity vary. The political and legal status of Jewish communities, normatively speaking, differs across the former Yugoslav republics. Sometimes Jews or Jewish communities are mentioned in constitutions, signed agreements with governments, or are recognized in laws that regulate religious communities. Despite normative differences, they share most of the same problems – a slow process of return of property, diminishing numbers due to emigra­tion and assimilation, and, although on a much lower scale than in many other countries, creeping anti-Semitism. They also share the same opportunities – a push for more minority rights as part of ‘Europeanization’ and the perception of Jewish communities as a link to influential investors and politicians from the Jewish diaspora and Israel. 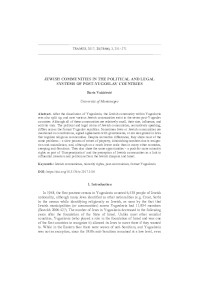