Voices for the Res Publica: The Common Good in Europe

The Res Publica (Latin for “public good”) project, funded by the Ford Foundation, was designed to bring together a diverse groups of thinkers, activists and commentators in Europe to consider some of Europe’s most pressing issues: notably, the loss of a sense of the common good in our pluralist democracies, a consequent erosion of feelings of shared belonging and the emergence of new types of tribalism.

The project involved independent voices from different religious, cultural, ethnic and secular backgrounds - each speaking in his or her personal capacity - in a series of small, closed and off the record national round tables – and each lasting for two and a half days in a rural residential setting. The national round tables were intended to open the way for a more pan-European shared reflection on the res publica.

Each round table explored the conflicts, underlying fears and defensive reflexes that exist in each country and within each minority or majority group; in other words, those factors which have led to a weakened common public space. The project intentionally sought to broach difficult questions in a context of mutual trust - questions linked to national identity, the role of the law, citizenship, the role and rights of (often silent) majorities and (often vocal) minorities, secular responses to collective religious demands, and the link between civil society and the state. The round tables were also intended to address the tensions between national cohesion and a ‘Europe without borders’, especially their impact in two areas: integration and the struggle against racism, Islamophobia and antisemitism. To facilitate the discussions, round table participants received a carefully planned set of questions and issues that they were free to address, challenge, or revise in the round table discussions.

The project comprised six national round tables in total (in the UK, Poland, Sweden, France, Germany and the Netherlands), followed by a seventh pan-European one. In keeping with the ‘off the record’ policy of the round tables, the reports of the meetings do not identify those who spoke, and specific attributes (such as a ‘Muslim voice’, a ‘Catholic view’ or a ‘Jewish position’, a ‘judge’, or a ‘civil society activist’) were only mentioned when the person specifically chose to speak in that capacity. Prior to the pan-European one, we commissioned a set of five papers from each country which addressed the five key themes which emerged from the round tables: national identity, the status of minorities, the law, religion, and the state and civil society.

Pinto, Diana Voices for the Res Publica: The Common Good in Europe. Institute for Jewish Policy Research. 2009:  https://archive.jpr.org.uk/object-eur98
Result from 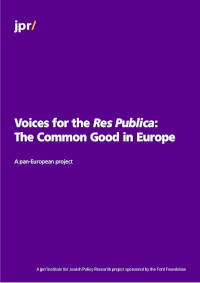