The Third Pillar? Toward a European Jewish Identity

Can Jews in Europe today come together to constitute a significant third pole of world Jewry alongside Israel and America? Can a new European Jewish identity emerge, one which would be enriching and useful to Jews and non-Jews in Europe and around the world? The author's response is yes, qualified by the proviso that identities take shape only if there are people who incarnate them, in this case Jews who feel equally at home in their Jewish and European roots. She feels that only now in the context of a democratic (or aspiring democratic) and reunited pan-European continent do the premises for such a new Jewish identity exist. Two political and cultural transformations made this possible: the transcendence of the ideological divisions based on Communism and the slow coming to terms with the Holocaust on the part of Europe s different countries. The road pointing to such a future European Jewish identity, however, is still fraught with controversy. 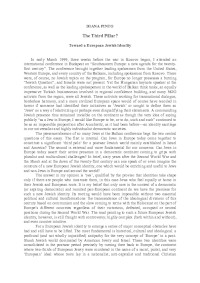