Antisemitic Attitudes among Muslims in Europe: A Survey Review

Institute for the Study of Global Antisemitism and Policy

In Western Europe, Muslims have been identified as a significant group of perpetrators of antisemitic acts. Is the level of antisemitism higher among Muslims than among non-Muslims? This paper will discuss European surveys on antisemitism and compare attitudes between Muslims and non-Muslims. It is based on the review of surveys from nine countries with more than 40,000 participants,
including almost 13,000 Muslims altogether. While no comprehensive study has been conducted on an international comparative scale and most national studies focus on selective samples such as certain ethnicities or student groups, a review of the available surveys shows a clear tendency: antisemitic attitudes are significantly more widespread among Muslims than among other segments of European societies. What is more, the interpretation of Islam seems to be highly relevant. Antisemitic attitudes are particularly strong among believing and practicing Muslims and correlate with authoritarian, “fundamentalist” interpretations of Islam. A comprehensive survey on antisemitism in France is discussed in detail.

Institute for the Study of Global Antisemitism and Policy

PDF, Antisemitic Attitudes among Muslims in Europe: A Survey Review

Jikeli, Günther Antisemitic Attitudes among Muslims in Europe: A Survey Review. Institute for the Study of Global Antisemitism and Policy. 2015:  https://archive.jpr.org.uk/object-eur190
Result from 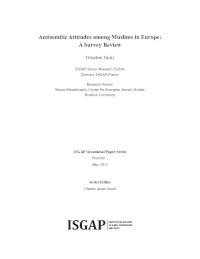