European Jewry – Signals and Noise: Is there a point of negative inflection?

Recent negative economic, political, and anti-Semitic developments in Europe, question the future thriving of Jewish life on the old continent.

According to a large-scale survey on Jewish people’s experiences and perceptions of anti-Semitism commissioned by the EU's Fundamental Rights Agency (FRA), in three of the nine states surveyed (namely Belgium, France and Hungary), between 40-50% of respondents said they had considered emigrating from their country of residence because they did not feel safe there. Moreover, some 200-300 Jewish families of French origin have recently immigrated to Montreal, and at least 120 families to London.

Beyond the Aliyah of 50,000 French Jews since 1990 (10% of French Jewry), new-immigrant associations claim there are some 20-30,000 additional French Jews who live part of the year in Israel but for convenience – and in order to avoid Israeli bureaucracy – prefer not to take Israeli citizenship.

Despite the trends outlined above, benefiting from relatively high social, professional, and economic personal status, most European Jews will in all likelihood remain in Europe.

Maimon, Dov European Jewry – Signals and Noise: Is there a point of negative inflection?. The Jewish People Policy Institute. June 23 2013:  https://archive.jpr.org.uk/object-eur126
Result from 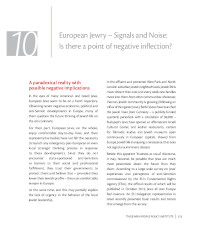