In the context of both the incredible diversity of the societies in which we now
live and the volatile political situation of the last few years, there have been
renewed levels of tensions between religious communities and in particular
between Jews and Muslims. At the same time Jews and Muslims find themselves
not only as perceived enemies but also as possible partners because of
the threat of radical political views gaining strength in the broader community.
In 2005, CEJI – a Jewish contribution to an inclusive Europe - began an initiative
to foster and promote dialogue and understanding between our two communities,
seeing it not only essential for our own well-being but also to strengthen
the vision of a diverse world to which we aspire.

Much work has been going at the local level on the ground but ideas and practices
are rarely shared. The people involved at a local level often feel isolated,
and lacking in support, at times feeling that they are operating in a vacuum, as
they try to generate dialogue between the two communities. The production of
these Mapping Reports for the 5 partner countries involved in the project
(Belgium, Denmark, France, the Netherlands and United Kingdom) intends to
begin to address these issues by publicising and promoting existing dialogue initiatives.
The Mapping Reports led to the First European Jewish Muslim Dialogue
Conference, which was held in April 2007. This event aimed to facilitate the
exchange of information and to gather positive experiences from the five partner
countries. Out of the conference came the recognition that dialogue is not
enough and that cooperation is also needed, and as a result the European
Platform for Jewish Muslim Cooperation was set up. The Platform is made up
of Jewish and Muslim organisations involved in local and national level dialogue
initiatives, and who are committed to developing cooperative actions between
their communities.

The Ford Foundation
The European Commission 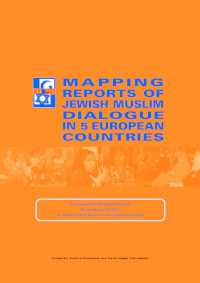