Bosnian Jewry: A Small Community Meets a Unique Challenge During the 1990s War

During wars, Jewish communities often become scapegoats and victims of the combatants. In the war in Bosnia-Herzegovina in the early 1990s, the opposite happened. The Jewish community in the country’s capital Sarajevo extended humanitarian services indiscriminately to people of all religions and was respected by the three warring parties, Muslims, Orthodox Serbs, and Roman Catholic Croats.
Support from the American Joint Distribution Committee and other foreign groups enabled the Jewish community to provide free food, medicine, as well as radio and mail services.
During the battle for Sarajevo the Jewish community evacuated a thousand Jews and two thousand non-Jews in eleven convoys and planes.
At present, six Jewish communities remain in Bosnia-Herzegovina with a total of a thousand members. Of these seven hundred are in Sarajevo and the remainder in Mostar, Zenica, Tuzla, Banja Luka, and Doboj.

Bosnian Jewry: A Small Community Meets a Unique Challenge During the 1990s War 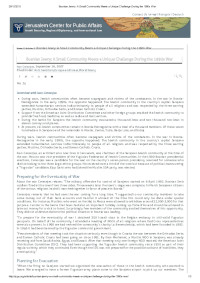