Coming to Terms with the "Dark Past": The Polish Debate about the Jedwabne Massacre

Vidal Sassoon International Center for the Study of Antisemitism, The Hebrew University of Jerusalem

The debate about Jan Tomasz Gross’s Neighbors (2000) in which the author gave a detailed description of the collective murder of the Jewish community of Jedwabne by its ethnic Polish neighbors on July 10, 1941, has been the most important and longest-lasting in post-communist Poland. The publication of Neighbors raised important issues such as the rewriting of the history of Polish-Jewish relations during the Second World War, of modern national history, and the reevaluation of the collective self-image of Poles themselves as having been solely victims. The article places the discussion within the context of two approaches to the collective past—first, the self-critical approach that challenges the old, biased representation of Polish-Jewish relations and the Polish self-image
as victims; and second, the defensive approach that seeks to maintain the older representations of Polish-Jewish relations and the Polish self-image. A general description of the debate is presented, followed by an analysis of
its various stages and dynamics. The conduct of the investigation by the Institute of National Memory (IPN) into the Jedwabne massacre and the official commemoration on the sixtieth anniversary of the crime are two crucial events that demonstrate that important segments of the Polish political and cultural elite are capable of overcoming its dark past. At the same time, reactions of the right-wing nationalist political and cultural elites and their supporters reveal that the defensive approach continues to exert influence in public life. Only time will tell if this latter phenomenon
will become marginal.

Analysis of Current Trends in Antisemitism

PDF, Coming to Terms with the "Dark Past": The Polish Debate about the Jedwabne Massacre

Michlic, Joanna Beata Coming to Terms with the "Dark Past": The Polish Debate about the Jedwabne Massacre. Vidal Sassoon International Center for the Study of Antisemitism, The Hebrew University of Jerusalem. 2002:  https://archive.jpr.org.uk/object-879
Result from 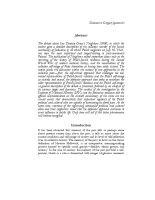