The socio-spatial boundaries of an ‘invisible’ minority:
a quantitative (re)appraisal of Britain’s Jewish population

This study, located in the disciplines of human geography and demography, explores the socio-spatial boundaries encapsulating Britain’s Jewish population, particularly at micro-scales. It highlights and challenges key narratives of both Jewish and general interest relating to residential segregation, assimilation, partnership formation, exogamy and household living arrangements.
It presents a critical exploration of the dual ethnic and religious components of
Jewish identity, arguing that this ‘White’ group has become ethnically ‘invisible’ in
British identity politics and, as a consequence, is largely overlooked. In addition, the key socio-demographic processes relating to Jewish partnership formation are addressed and a critical assessment of data pertaining to the decline of marriage, the rise of cohabitation and the vexed topic of Jewish exogamy, is presented. The analysis culminates by linking each of these issues to the micro-geographical scale of the household and develops a critical assessment of this key unit of Jewish (re)production. Jewish population change is contextualised within the framework of the second demographic transition.
This deliberately quantitative study is designed to exploit a recent glut of data
relating to Jews in Britain. It interrogates specially commissioned tables from
Britain’s 2001 Census as well as four separate communal survey data sources. It
highlights and challenges recent geographical critiques of quantitative
methodologies by presenting a rigorous defence of quantification in post-‘cultural
turn’ human geography. It emphasises the importance and relevance of this fruitful shift in geographical thought to quantitative methods and describes the role quantification can now play in the discipline. Above all, it synthesises two disparate sets of literature: one relating to geographical work on identity and segregation, and the other to work on the identity, demography and cultural practices of Jews. As a result, this thesis inserts the largely neglected ethno-religious Jewish case into the broader geographical literature whilst developing a critical quantitative spatial agenda for the study of Jews.

The socio-spatial boundaries of an ‘invisible’ minority: a quantitative (re)appraisal of Britain’s Jewish population 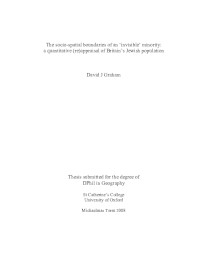